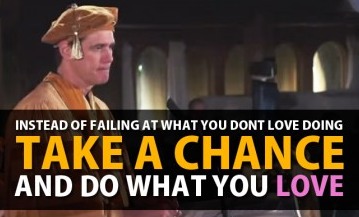 Media all over the world covered the event, calling it the “best commencement ever.”

The address was brimful of wisdom and practical advice. It offers an enlightened perspective on living life.

“You are the vanguard of knowledge and consciousness, a new wave in a vast ocean of possibilities,” he told the students. “On the other side of that door there is a world starving for new ideas, new leadership.”

“I learned many great lessons from my father,” he said, “not the least of which is that you can fail at what you don’t want, so you might as well take a chance on doing what you love.”

Jim Carrey is an award winning actor, comedian, author, and philanthropist. He’s been hailed as one of the most creative and celebrated artists of our time. MUM President, Dr Bevan Morris calls him “the funniest man on earth.”

The University Board of Trustees presented Mr. Carrey with an honorary Doctor of Fine Arts degree. This was in recognition of his significant lifetime achievement and the joyful gifts he has given to the world.

“I want to thank the trustees, the administrators, and the faculty of MUM for creating an institution worthy of Maharishi’s ideals of education – a place that teaches knowledge and experience necessary to be productive in life,” Mr. Carrey said.

Students graduating from this remarkable university represented 54 countries.  There were 99 from the US, 61 from Ethiopia, 45 from the People’s Republic of China, 27 from Nepal, and the others from countries all over the world.

Jim. Carrey encourages students to hold on to their dreams. “… and be of service to others.”

He asked: “How will you serve the world? What do they need that your talent can provide? The effect you have on others is the most valuable currency there is.”

“Now fear is going to be a player in life,” he said, “but you get to decide how much. So many of us choose our path out of fear disguised as practicality. What we really want seems impossibly out of reach and ridiculous to expect, so we never dare to ask the universe for it.”

Jim Carrey has been nominated for six Golden Globe Awards for best actor, winning the award two years in a row. He has also won numerous MTV Movie Awards, Nickelodeon Kids Choice Awards, and People’s Choice Awards, among others.

In 2013, Mr. Carrey released a children’s book, How Roland Rolls, which received the Gelett Burgess Children’s Book Award for contributions to children’s literature. He is also a celebrated painter and sculptor.

In 2005, Mr. Carrey founded The Better U Foundation which addresses global food security.  It helps rice farmers earn a better living for their families by supporting the System of Rice Intensification. He also supports the David Lynch Foundation’s efforts to bring the Transcendental Meditation® technique to at-risk young people and veterans with PTSD.

We’ll be playing the Jim Carrey commencement speech at the Houghton TM Centre this Thursday. Love to see you there!