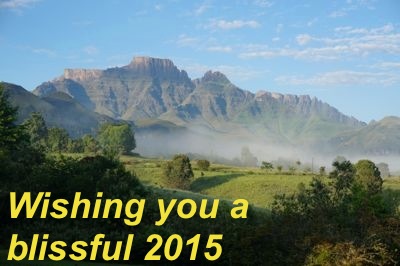 Good news is all over – and the start of a New Year is a great time to review it. Here are some great new links from the GlobalGoodNews website – worth bookmarking.

And second-to-bottom is a treasure-trove of TM videos for you!

‘Timeless’ Beach Boys interviewed by Florida coastal news 21 December 2014 – In spite of ceaseless travel performing approximately 150 concerts per year, Bruce Johnston and Mike Love of the legendary rock group, The Beach Boys, live a life in balance with regular practice of Transcendental Meditation. ‘If I don’t do TM, in very short order, I have less energy and clarity,’ Mike Love said. ‘I get up in the morning, do some yoga and then TM. Right after sound checks before a show, I do TM. In planes, trains, and buses, you name it, I do TM.'(more)

Brain signatures of meditators similar to top-performing athletes and CEOs
20 December 2014 – Maharishi University of Management (MUM) researchers Fred Travis and Harold Harung are featured in a Forbes article about success habits of top performing athletes and CEOs. The article states that meditation is one of the top four habits for achieving peak performance and refers to brain wave research by the MUM researchers. An excerpt from MUM Executive Vice President Craig Pearson’s new book, Supreme Awakening is also featured in the article. (more)

Joining the Universal Peace Corps: Transforming the world from within, Part I
18 December 2014 – Cynthia E. Johnson, a teacher of the Transcendental Meditation programme, writer, and graduate of Theological Studies from Harvard Divinity School, explores the question, ‘Can we possibly transform this world of ours, on a large scale, for the better?’ She explains that there are three sources we can turn to for knowledge: wisdom of the sages, both ancient and contemporary; modern science; and our own experience. Maharishi Mahesh Yogi calls these the ‘Three Eurekas’. (more)

My story: Breaking down barriers for women and children
15 December 2014 – Tish Lara was ready to walk away from her career as a social worker when she joined the David Lynch Foundation’s Women’s Initiative division. She began Transcendental Meditation after listening to the experiences of people who had just begun the practice and found that, ‘clients share their struggles and explain how Transcendental Meditation supports their healing process; they experience a reduction in post-traumatic stress symptoms and feel hopeful, happy, and empowered’. (more)

Book review: ‘Your Brain is a River, Not a Rock’ by Dr Fred Travis
12 December 2014 – Dr Fred Travis, a leading researcher in meditation and brain neurophysiology, details the latest results in the field of neuroscience in a way that is easy to understand and enjoyable. Your Brain is a River, Not a Rock covers a fascinating range of topics from children’s development to how we can reset the functioning of a brain which is running havoc as a result of perpetual stress response. Dr Travis explains the ever-changing dynamics of neural function, an unceasing flow that can be consciously changed for the better through Transcendental Meditation. (more)

Staff Sergeant Todd Knauber on his road to recovery with Transcendental Meditation
11 December 2014 – In an article published on the US Army homepage, Staff Sergeant Todd Knauber described advances in rebuilding his life and recovering from injuries after learning Transcendental Meditation. Beginning the practice through the David Lynch Foundation, he reported after four months, ”It was not a branch for me to grab hold of but rather a taproot under my feet. A stable platform which gives me a moments respite so I can put my pain into perspective enough that I can reattempt the climb.” Doctors promised him that through drugs and hard work he could potentially heal over the course of years. But since beginning Transcendental Meditation he has moved closer to achieving his recovery in months, ‘It is our greatest weapon in helping to combat the scars of conflict,’ he said. ‘This programme provides the grounds to reestablish hope; and begin to truly heal.” (more)

Huffington Post: David Lynch’s mission to change the world
9 December 2014 – In a rare, feature-length interview, Huffington Post editor Marianne Schnall delved deeply into filmmaker David Lynch’s personal experience with Transcendental Meditation and his successful mission to bring the technique to those who need it most. (more)