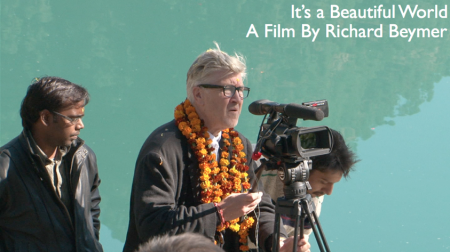 David Lynch stars in a film made by meditator, actor and filmmaker Richard Beymer as he accompanied David with Bob Roth and a film crew to India.

David and the crew travelled from northern India to the south retracing Maharishi’s footsteps for a documentary film he was going to make.

This is a record of the early stages of the making of that film on Maharishi.

David Lynch first visits Jyotir Math where Maharishi served his teacher Guru Dev for 13 years. After Guru Dev passed, Maharishi went into silence for 2 years in a small cave-like room in a house in Uttar Kashi, the Valley of the Saints. David takes us right into that cave!  Sadly, this house was destroyed by recent floods in Uttar Kashi.

A persistent thought brought Maharishi out to travel to a famous temple in Rameshwaram. From there he continued on to the great Temple to Mother Divine in Kanyakumari. This is right at the southern-most tip of India where the three oceans meet.

Maharishi had started his return journey northwards when a man from the Trivandrum Public Library asked him to speak. The film takes us  into that library where Maharishi gave his first series of seven lectures.

People had asked to learn what he was teaching, and that was the start of the TM movement. Maharishi’s next two years’ travels are covered by David in ten days.

The film ends with Maharishi explaining why he came out of the Silence of the Himalayas to bring his message to the world. In a private meeting he had told David Lynch that he thought what he had to offer would be useful to humanity. He said that the nature of life is bliss, and the nature of the individual is cosmic. And all those years of teaching TM had borne that out. This was later verified by hundreds of scientific research studies on the development of higher states of consciousness and the range of benefits in people’s lives.

This film is also a rare glimpse into David’s personal life. Throughout the journey David reveals snippets of his film career. It’s an intimate look at David Lynch the man, the director in action, the devoted meditator, and his inspiration to share the gift of Transcendental Meditation with the world through his Foundation. You can watch a trailer here, then visit the website to order the film to stream or download if you like.

And here is a really great Huffpost article you will enjoy about David and his his mission to help the world. His interviewer, Marianne Schnall writes: “What I experienced during our inspiring and thought-provoking time together is that while he is an explosive force of nature creatively, in person he is a gentle, soft spoken, thoughtful, and deeply caring and compassionate soul.”